Happy new year, Adventurers! 2019 was a great year for Ring of Elysium, and we would like to thank you for joining us on this incredible journey. As always, we’ve been continuously collecting feedback from the community and listening to your thoughts on a daily basis. In today’s Developer Insights post, we want to start the year off right by addressing the hottest topic in our communities- maps.

Yes, there is a new map coming to ROE, and you can expect more than one in the future. The development of the upcoming map started a while ago, we didn’t want to reveal it too early since building a new map from scratch is a big commitment and an immense amount of development effort; we are not going to make another Mt. Dione or Europa Island with a different look, we want to create a map that addresses the issues of previous maps. We know waiting sucks, and we greatly appreciate your patience, understanding and goodwill.

Before we talk about the new map, let’s rewind a bit and breakdown some of the characteristics of Europa Island:

○     When we first designed Europa Island, we wanted to give players the ability to move around a vast, open landscape to provide a truly immersive experience. We wanted you to feel like you’re playing in an open-world game with a variety of different things to do. This ended up making Europa Island a massive map. As we continued to add more POIs to the map, the playable area became even bigger, which is a lot of space for 60 players to play with, creating quite a bit of downtime between safe zones and in early-game, since we do not have the convergence effect of the dropship spawn-mechanism, players are more likely to be scattered across the various POIs on the map (except the hot-droppers) with our spawn system.

○     Our intention was to provide players with tons of freedom and possibilities with how they traverse around the map. Spots to glide from, open areas to bike across, endless angles to grapple, and water areas to explore. This helped to make each game’s experience completely unique, players might find themselves trying out all the slopes for BMX stunts in the first game, and then driving a speedboat through the tumbling sea under extreme weather in the next one. Speaking of the sea, we later introduced underwater combat with the DPV, expanding our tactical options and adding another way to traverse the waters. However, even though the traversing experience around waters feels special in ROE, it can sometimes be a struggle and slow down the pacing of the game.

○     We envisioned Europa Island to be realistic and immersive. We put much effort into detailing a vegetation filled, lush environment which established the identity of our island. This caused the line of sight to be obstructed at times, leading to less mid to long-range encounters which was a lot more common on Mt. Dione. As you can see from the statistics below, the chance of bullets hitting a target over 100 meters is  lower on Europa Island compared to Mt. Dione. 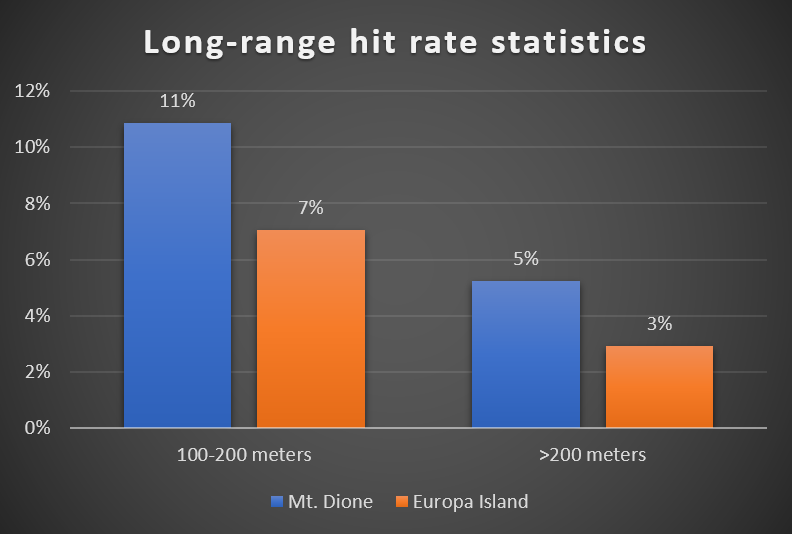 ○     Artistic direction is absolutely crucial when it comes to defining the identity and flavor of the map. Europa’s original concept was this beautiful, verdant island that is lively yet dangerous with the erupting volcano. So we decided to go with a more bright and saturated color palette, which works well conveying that concept.

With the new map on the horizon, we want to take this opportunity to make some fundamental adjustments, bringing a refreshing experience while keeping the core that makes the game unique and fun:

○     Gunplay will continue to be a major focus. We want to incentivize players to initiate engagements in all kinds of distances and situations instead of hindering their options with obstructions. This means that the new map will feature a much more open line of sight, with fewer influencing factors like vegetation.

○     There’s a mixture of downtime and lack of encounters on Europa- mainly due to its large size, water coverage, off-road terrains, and lush vegetation. This time, we want to make things faster and more action-packed on top of feeling engaging and rewarding. In order to achieve that, we will take all four issues above into consideration when we design the most appropriate theme and location for the new map.

○     We’re shifting the art style of the new map to a more serious and realistic approach. As you may have already seen, the latest POI introduced to Europa this season- the Campbell Shooting Range, has a very different look and feel. We were thrilled to see the feedback on this new approach has been extremely positive in the community, let’s just say that Campbell is just a tease of what’s to come.

○     Other than the points above, we have also been reviewing various other aspects of the design. For instance, we realized that Europa was slow-paced partially due to the nature of our safe zone system. While this “shaped safe zone” has been a staple to the game, it is not as progressive and does not provide a constant pressure that forces players to converge effectively.

With the new map coming up, let’s talk about where Europa Island and Mt. Dione fit in. These two maps have captured our audience in different ways, and we want to figure out the best system to incorporate them into the game. There is no perfect solution here, but we want to be upfront and transparent with you, and we are constantly trying to figure out what works best:

Since ROE is a Battle Royale, each game round eats up a lot of players. It’s incredibly difficult for us(or any other BR out there) to support a healthy matchmaking experience by making all maps playable via selection. We also feel that random map matchmaking is not a good strategy because players may leave the game until they matchmake into the map they like, leaving the lobbies half empty. And a daily/hourly map rotation will only divide the community in a really negative way. So as of now, we think adding Europa Island into the current LTM rotation and opening up the available hours would be the best approach. However, as previously stated, we will continue to monitor all feedback from our communities, and we want to hear what you have to say about this topic to help us make a clear, concise decision.

As mentioned above, there will be more than one new map coming to the game in the future, so while it’s still early, get your creative juices flowing and let us know your best map concepts, it might actually become the 4th map of Ring of Elysium!

We are incredibly excited about the direction we’re headed and hope you all are as well! We also can’t wait to to reveal more details about this new map in the very near future with you. Make sure to keep an eye out on our official platforms for more teasers and information coming soon, see you next time.